There’s a Feat of Strength that was datamined from the PTR for players who purchase the Mighty Caravan Brutosaur sold during Battle for Azeroth. The mount will no longer be sold by the current vendors and will be moved to the Black Market Auction House according to official word. 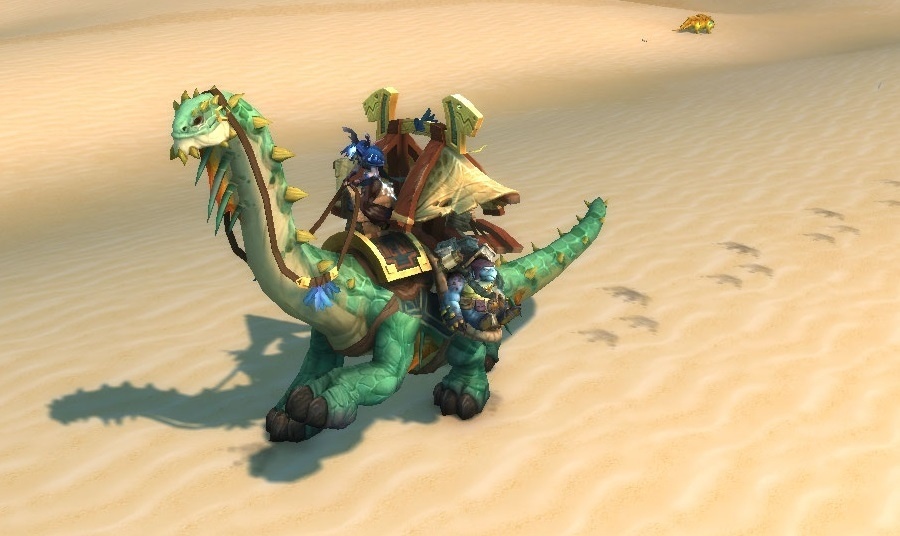 Mighty Caravan Brutosaur owners will receive a new Feat of Strength in Visions of N'Zoth. Don't have one yet? Then amass that gold, because the FoS is likely going away in Shadowlands!

Hello! Yes. About that …

Like all dinosaurs, the Mighty Caravan Brutosaur’s days are numbered. I can confirm that when Shadowlands goes live, the shady vendors Talutu and Tricky Nick will cease selling it. Their other offerings – the Lost Platysaur pet and the Palehide Direhorn mount, will remain available for purchase.

We will make sure that the unforgettable Brutosaur mount is added to the lists of possible items that are sold in the Black Market Auction Houses. And of course, this new Achievement “Conspicuous Consumption” is a Feat of Strength, so as such things go, it’s not actually very conspicuous.

trying to figure out where these people keep getting this idea that the AH vendor is being removed from the mount because that has been said nowhere and yet people are acting like this is common knowledge.

We want to be perfectly clear on this – we do not intend to remove the AH vendor from this mount, especially when some players put in a great deal of effort to acquire this mount specifically for that functionality. Of course, we remember that we removed the Mystic Birdhat’s Reforging from the Grand Expedition Yak, but that was because we removed Reforging from the game.

The Mighty Caravan Brutosaur is something that fundamentally alters players’ flow around the world, and it’s a unique convenience, but it’s certainly not essential. We’ve seen how luxury mounts like the Traveler’s Tundra Mammoth started out as something special and rare: a repair vendor wherever you are! They were originally ultra-exclusive and mostly purchased by guild banks for convenient raid use, but then became increasingly commonplace due to gold inflation over time.

We think that a moderate amount of gold inflation is healthy. It ensures that new or returning players can catch up and participate in server economies without having to put in a herculean effort to avoid being priced out of essential goods. In this case, we want to ensure that in the long run, years from now, we don’t find ourselves looking around and seeing AH mounts that are as common as repair mounts are today.