In this thread, please post your feedback on the revamped Paladin talent tree, once you’ve had a chance to test Paladins in the Alpha.

Divine Steed being on a 1 minute CD feels quite bad. Even if you take both modifier talents in Cavalier and Seasoned Warhorse, 5 seconds of movement on a 1 minute recharge just seems weird.

Hi, thanks for your feedback! A few Rank 2 spell upgrades were overlooked in the conversion – as noted, Divine Steed’s 15 sec cooldown reduction, and Avenger’s Shield’s silence. These will be included in the baseline version of the spell in future builds, along with fixes for some of the bugs you all have identified in this thread.

Is it the intended behavior that Avenger’s Shield and Divine Toll aren’t generating Holy Power?

As for Divine Toll, part of what has made that ability fun and impactful is its flood of resources. We’re exploring ideas for how to reincorporate this in a future version of this ability.

In general, thank you all and please keep the feedback coming! Your thoughts and opinions are helpful and valued as we continue to iterate on these trees.

For Dragonflight, we want to give Holy Paladins more options for caster-focused playstyles by bringing back the Power of the Silver Hand passive effect from the Legion Artifact, in addition to the active button Tyr’s Deliverance.

Rule of Law no longer mentions increasing our Mastery, which seems like a significant nerf

This was an intentional change. Rule of Law provides unique utility to increase the range of your heals. The reality is, people used it as a throughput cooldown. Not every situation needs a range increase, but having the option to do so is nice and not something we wanted to remove.

This is something we’re working on, we don’t intend on removing the ability to dispel magic effects from Holy Paladin.

While this ability is relatively new to WoW as a whole, it does exist as a thing Paladin are familiar with, changing its name for the sake of change likely causes more confusion than a slightly off-themed ability does. Also, Shadowlands and its story doesn’t stop existing after Dragonflight launches.

Lay on Hands cannot be casted in Rated PvP matches.

This is a topic of discussion, but nothing final to announce either way.

The current Infusion of Light leaves much to be desired, time to bring back the fast cast procs

Bringing back a way to get some quick Holy Light casts off is something we are discussing, whether through Infusion of Light changes, or some other method.

Holy Shield is themed as being Spell Block, however in Shadowlands, it isn’t actually a real blocked attack under the hood. This has been changed to work similar to how standard physical blocking works, and there are some changes as a result of this:

These changes will also apply to the new Protection Warrior Spell Block talent.

In the next beta build we will have an updated tree ready for testing This update will include major pathing changes, new spells, and node cost reduction. We would like to give you our thoughts on our design direction for this tree moving forward.

We’re excited at the prospect of offering tools for a casting focused Holy Paladin build existing in this tree. Our intention is for this to not overpower the melee playstyle, but we want to find room for both to exist simultaneously without impeding each other. At the same time however, we do not think separating the tree into two distinct “caster” and “melee” paths is compelling tree structure in this case. Our goal is to intermingle spells and abilities in such a way that players are encouraged to path throughout the tree, but not feel like they must pick up undesirable talents for their build along the way.

We felt the overall nodes in this tree were in a solid spot and that most of the issues in this tree were pathing related. That said, we’ve added several new or returning spells in support of both the melee and caster styles. Hopefully this mixes gameplay up a bit more and offers further compelling choice, particularly in the bottom section of the tree. We’ve also removed a few nodes that we felt were not playing well including Liadrin’s Fury Unleashed and Tyr’s Munificence. Tyr’s Munificence’s effect will be added baseline to Tyr’s Deliverance.

Lay on Hands in rated PvP

We’ve decided to enable Lay on Hands in rated PvP with a 25% PvP multiplier healing reduction. This change was influenced by several factors. Modern PvP realities are that a powerful heal such as this does not have the same level of impact that it did in previous versions of the game. It is likely that if we were to go back in time with the current tools we have, our solution would have been to apply a PvP multiplier to such a strong ability without outright disabling. Given that Lay on Hands applies Forbearance, its cooldown is quite significant, and with Dampening and PvP multipliers to leverage, we feel comfortable enabling this iconic Paladin ability in rated PvP. This change will be applied soon and won’t apply to the upcoming beta build.

Here’s a preview of what you can expect to see next build: 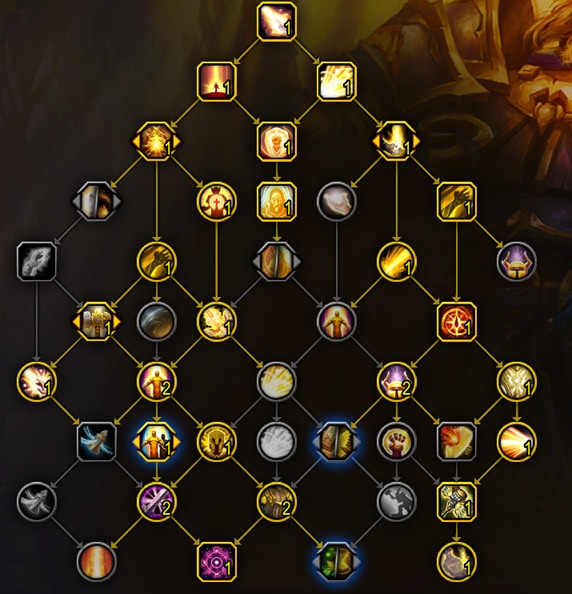 Resplendent Light. New Talent, row 4. Holy Light heals up to 5 targets within 8 yards for 8% of its healing.

Divine Favor. New Talent, row 5. The healing of your next Holy Light or Flash of Light is increased by 60% and its cast time is reduced by 30%. 45 second cooldown.

Veneration. New Talent, row 8. Flash of Light, Holy Light, and Judgment critical strikes reset the cooldown of Hammer of Wrath and make it usable on any target, regardless of their health.

Empyrean Endowment. New Talent, row 10. Judgment empowers your next Word of Glory to automatically activate Light of Dawn with 25% increased effectiveness. The effect can only occur every 30 seconds.

Inflorescence of the Sunwell. New Talent, row 10. Infusion of Light has 1 additional charge, reduces the cost of Flash of Light by an additional 30%, and has a 30% chance to generate an additional Holy Power from Holy Light.

Thank you all for your continued feedback!