Bombs will sometimes go invisible when dropped. Mostly happens during intermission and just before the wall raises in the new area. Phase 3 planet cracker is also invisible except for maybe furthest one from the boss. The visual bug doesn’t affect everyone the same. 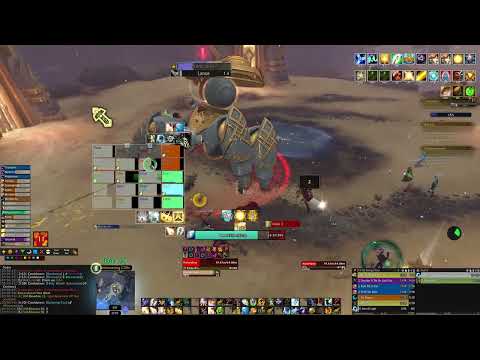 When the rogue(with 3 chat bubble above head) drop the bomb you would see it for a fraction of a second at 0:03 back right leg. Once dropped it stays invisible to the healer’s pov, there was no indication of a bomb there until our outlaw rogue picked it up again. Some people in the raid could see it and others cannot.

Hello everyone and thank you so much for the detailed reports.

We’re actively investigating the recent visual issues with Halondrus. We’ll provide an update as soon as we have more information, and be sure to also keep an eye out on hotfixes.

Hello, I’m back! We identified the issue with Planetcracker Beam and deployed a hotfix that should address the issue. We’re still looking into the other reports and will provide any updates as we receive them.

We’ve recently deployed a hotfix that should fix the visual issue with Volatile Charges disappearing.

We’re still investigating the other reported visual issues with the encounter and will update this thread as we receive further information.