So, I was asked to make a thread about this to help bring some more light to the issue outside of my replies to other threads and other people’s comments on social media. With Grimrail Depot most likely being one of the two dungeons being returned for Shadowlands Season 4, this issue needs to be brought up again, especially with Blizzard having employees specifically to address accessibility concerns now.

For those who weren’t around in WoD, one of the major complaints other than cut content or flying back then was that people got horrible motion sickness in Grimrail Depot. I’m one of them.

Unlike most motion sickness in game, which can be helped immensely with the accessibility options that were recentlyish added to disable camera shaking and such, it does no such thing in Grimrail, as most people (most, not all) have a reaction to the moving background. And unlike the only other (I believe?) encounter with a constantly moving background (Spine of Deathwing), this can’t be alleviated by simply moving the camera, as there’s mechanics that require seeing the entire arena.

This motion sickness can be bad - I’ve had to do Grimrail 4 times this week for Timewalking. I could not simply leave because you get a 30 minute debuff if you do. All but one of those times, I ended up in bed for hours afterwards feeling like I’m going to throw up, to be blunt. The other time was with my guild, and they were understanding that I needed to focus on not the background, so I was less useful than I could have been, but I was able to get through it.

What could be done, you ask? Off the Grimrails: Uncovering the Secrets of Grimrail Depot - Hidden Azeroth

Racing across the war torn planet of Draenor, The Grimrail carries a cannon powerful enough to shatter the defenses of Shattrath City. In a daring final effort to stop the delivery and save the city, heroic adventurers venture into the Grimrail Depot...

As documented in this article 3 years ago, the train isn’t actually moving at all. The background is the thing moving. (This is actually a really fascinating article and I recommend anyone who’s ever been curious about Grimrail read it. I read it back when it was posted)

So this brings me two ideas that I think would be relatively simple:

There are possibly other solutions as well, but those are the two I can think of off the top of my head. Thoughts are appreciated.

And since I know someone in General Discussion will tag me and ask: “But Mai - you don’t do M+, why do you care?” - I’m not the only one with this issue, and I’ve been slowly trying to break out of my comfort zone and deal with my anxiety and go into +2s. I may go further later on. I don’t know yet. But I do know if Grimrail goes live like this, I won’t be able to.

Thank you for taking the time to share this feedback. Motion sickness was a concern when we first talked about the possibility of Grimrail becoming a Mythic+ dungeon. Fortunately, one of our designers came up with a clever solution which he was happy to share in the video below: 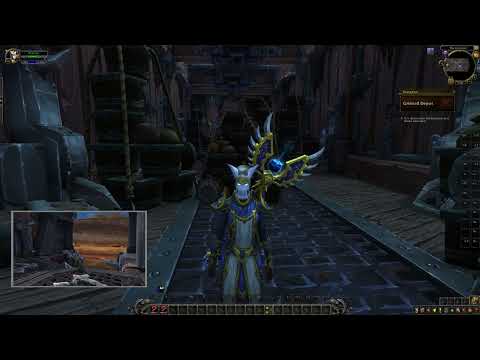 As mentioned in the video this is currently a one-off solution for places we’ve identified motion sickness as a concern due to background motion, but we hope it’s helpful for those affected and we’ll keep an eye out for any other places where it might be applicable.