Warlords of Draenor: Adventuring from 90 to 100

World of Warcraft: Warlords of Draenor will take players on a journey to the savage world of Draenor to stand against a formidable new threat to Azeroth: the Iron Horde, an orc army forged from the raw materials of legend. Just step through the Dark Portal, and the battle will begin. . . .

Return to the Dark Portal

For both Horde and Alliance players, the campaign starts behind enemy lines in the Tanaan Jungle on Draenor. It’s up to you and your allies to prevent the seemingly unstoppable Iron Horde forces from passing through the portal to wreak havoc upon Azeroth as you know it.

Once on Draenor, you’ll face the might of great orc warlords like Grommash Hellscream and Kilrogg Deadeye, who command a legion of 10,000 orcs from Draenor’s united clans—but you won’t have to take on this desperate mission alone. The great draenei champion Vindicator Maraad will accompany the Alliance through the portal, while the Horde will go through backed by Thrall. Your strike on Draenor is practically a suicide mission, but if you can destroy the portal from the other side, you’ll buy your faction—and Azeroth—some much-needed time. . . .

All level-90 players will begin in the Tanaan Jungle, and for newly boosted level-90 characters, the experience will be tailored to help you get up to speed and ready for taking on the challenges to come. Instead of gaining all of your skills and abilities right away, you’ll be able to unlock them as you progress and learn your way around your more powerful character—and you’ll need every ounce of your ability to stop the Iron Horde and continue your campaign on Draenor.

Once the threat at the Dark Portal has been (temporarily) dealt with, Alliance and Horde players will take divergent paths. Each will answer the call of their new allies to engage the native threats of the world and mount a long-term defense against the Iron Horde. 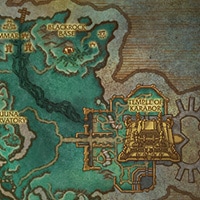 In the aftermath of the Dark Portal strike, Alliance players will be led to Karabor in search of allies to face the Iron Horde. Once there, you and other travelers will work together to save the draenei holy temple and turn it into a safe haven for your faction. Be on your guard! While the Iron Horde lays siege to the temple, Ner’zhul and his nefarious Shadowmoon Orc clan pursue another line of attack that could put the entire world in mortal danger. 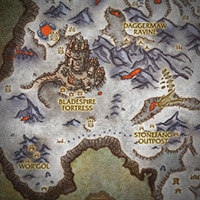 Following the assault on the Dark Portal, Horde players will be led to Frostfire Ridge and the aid of the Frostwolf Clan. Once there, you will battle the ogres of Bladespire Fortress to secure a home in this harsh land. Don’t be fooled by your progress, though—the Thunderlord Clan will be right on their heels to reclaim their lands.

As you explore the reaches of Draenor, you’ll have the opportunity to delve into six new dungeons to gain experience and earn new items. These include 3 for leveling up and 3 for max level, as well as a return to a classic: Upper Blackrock Spire! Challenge Modes will also be available once characters have reached level 100 and are ready to test their skill.

A whole world’s worth of rewards awaits as you brave the unforgiving wilds of Draenor. Taking a cue from the Timeless Isle, Warlords of Draenor will strike a balance between traditional questing and discovery. Each quest will have its own unique reward, but this time around, you’ll also have a chance to earn a rare or even an epic item, adding an element of surprise when you’re turning in quests. New quest UI improvements will help guide you on your journey and help you identify larger story arcs in zones as well as side quests. 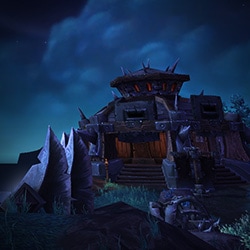 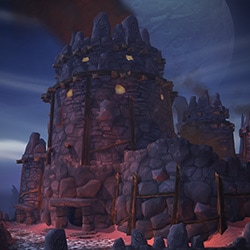 As you progress toward level 100, you’ll also open up the opportunity to create your very own Garrison—one of Warlords of Draenor’s biggest new features. Once ground is broken, you can decide which buildings to construct, which followers to recruit, and which missions they should undertake. All of this becomes integral in your ultimate quest to advance your character, and you’ll be returning to your Garrison frequently to further your goal of protect Azeroth from the Iron Horde.

Across Draenor you’ll also encounter rare spawns and personal Scenarios, and all manner of skirmishes and points of interest that will dot your path to level 100. And as you earn levels, you’ll receive bonuses to existing spells and abilities, capped off with a new talent tier at max level.

Will you heed the call to protect Azeroth? Do you have what it takes to face the Iron Horde and defeat the armies that threaten your world’s existence? There’s only one way to find out!