We’ve got a number of upcoming changes to the core and spec trees coming in 10.0.5. Our hope is that they fix some underlying issues with the trees while still giving you the same options and overall builds you’ve gotten used to.

One of our goals for the talent tree was to make it impossible or unlikely to pick talents that would do nothing for a character. Druid breaks that guideline in a couple places – Feral can take talents that modify Berserk without taking Berserk, Guardian and Feral can skip Swipe, etc. Most players don’t do these, but we still want to tighten this up.

In the core tree, we’ve moved Wild Growth and Sunfire up so they’re among the first points Resto and Balance druids take. Feral druids now start with Rake and Rip, instead of Rake and Thrash. All druids now learn Swipe at level 10, at half its current damage. The previous talent to learn Swipe is now Improved Swipe, restoring Swipe’s (and Brutal Slash’s) current damage.

We’ve rearranged other talents and added connectors and a couple new talents to give you some different options. Lastly, we changed Killer Instinct and Nurturing Instinct to grant 3/6% value for just 2 talent points. 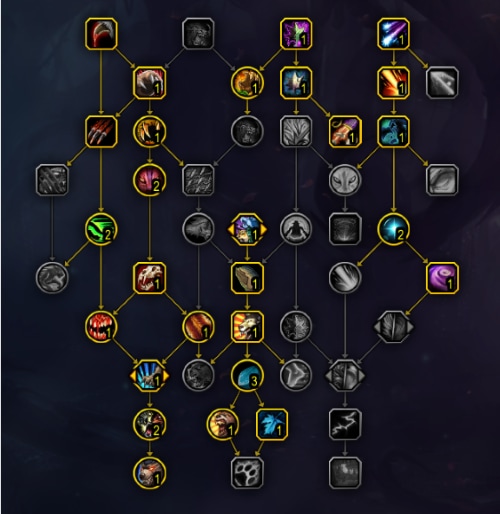 While we want you to make choices in your talent tree, the option to skip your major survivability cooldown in exchange for more DPS isn’t really one of them. Feral and other specs that include major survivability cooldowns in their spec tree are generally tuned with the assumption you’re taking those talents. To reinforce the importance of Survival Instincts, we’re moving it above Berserk.

We like the power of Feral’s bleeds and are happy that there’s an AOE build that allows you to just cast Primal Wrath, but we don’t want it to be the only option, as it locks in a lot of choices. To make builds that don’t reapply DoTs so frequently more viable, we’re boosting the power of Ferocious Bite in single target and AoE and pulling back the power of Rip and Rake a bit, especially in AOE. This also somewhat increase Feral’s power to funnel damage into a priority target.

It’s been a challenge to find an appropriate place for Lunar Inspiration. It adds a button to the rotation and another DoT to track. Because of that increased complexity, we don’t want it to feel required for all players. However, the current reduced-power version also isn’t meeting the needs of players who do want to play it.

To address this, we’ve moved it to a choice node with Feral Frenzy at the bottom of the talent tree and restored its former power. This makes it possible to pick it up also with the talents that synergize well with it but gives players that don’t want to play it plenty of other powerful options in the same area of the tree. 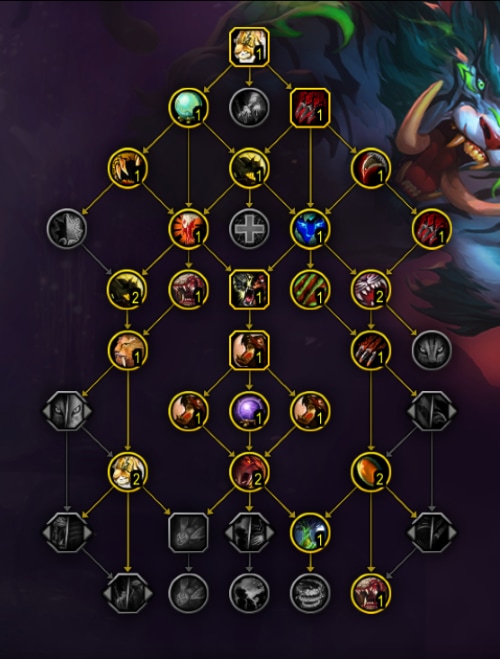 We’ve reorganized the Balance Druid tree to address Solar Beam’s placement to avoid forcing Balance Druids to make a choice between utility or throughput. While addressing this, we wanted to make some changes to the overall flow of the tree and distribute more power to the later parts of the tree.

Cosmic Rapidity
Circle of Life and Death offered an interesting playstyle choice for Balance, however, with Balance’s new Mastery the juggling felt much more intense and punishing. Cosmic Rapidity increases the rate Moonfire, Sunfire, and Stellar Flare deal damage without reducing their duration to reduce how often Balance needs to refresh their DoTs in order to benefit from their Mastery.

Multiple Rank Adjustments
Talents such as Aetherial Kindling and Solstice didn’t feel impactful enough to warrant multiple talent points to achieve their maximum value. The ranks that were removed from these talents were redistributed to other talents that felt appropriate to have multiple ranks. 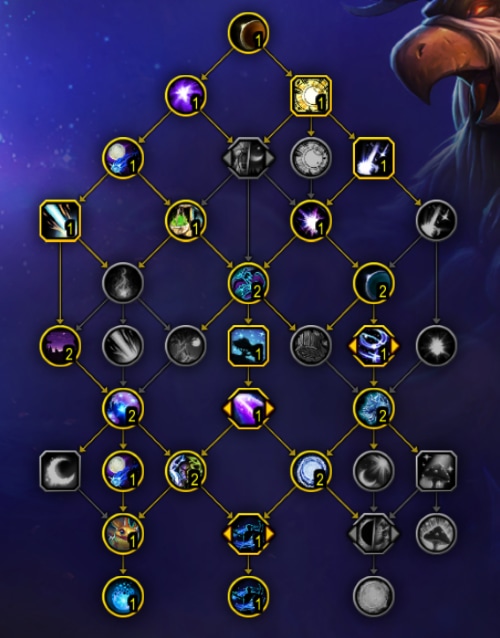 Ursine Adept concentrated too much rotational functionality and defensive power into a single node. We didn’t feel taking it or not offered enough choice to players, so we changed it to a Guardian baseline ability and adjusted the initial section of the tree to account for its absence. Additionally, in recognition of how prohibitively dangerous it often is to cast Innervate in combat, we’ve added it to the list of abilities which may be cast in Bear Form.

In this most recent look at the Guardian tree, our primary objective was to open up the final section of the tree. In the previous iteration, there were several bottlenecks restricting access to each final segment. We’ve added new connections and shuffled talent locations around to allow more points of entry into this section of the tree and offer more freedom of choice.

Reinvigoration felt like an outlier both in terms of interest and power level in the final gate, so it has switched positions with Flashing Claws.

To preserve point balance and to maintain decision-making tension, we’ve also added a few more abilities in this section:

Some talents have changed icons to avoid duplication. 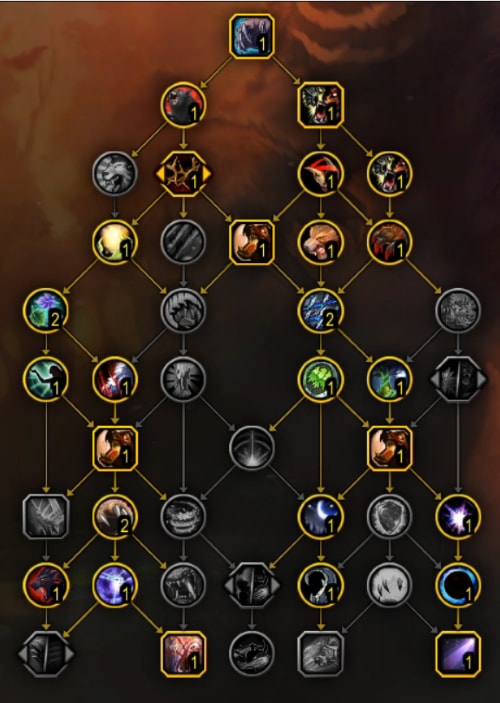 Here is a list of additional Feral changes coming in a future 10.0.5 PTR build:

We are happy that players are enjoying the “full bleed” AOE build that almost entirely spends combo points on Primal Wrath. We want to keep that build strong for players that enjoy it, while providing other viable alternatives. As we continue to iterate on balance, we believe the last round of changes reduced its power too much, so we are undoing some changes and adding some boosts to damage dealt by Tear Open Wounds and Rip and Tear.

Lunar Inspiration is no longer a choice node with Feral Frenzy and has been moved to the middle section of the tree. We adjusted its damage to be appropriate for its new location. Taste for Blood and Sudden Ambush are now single point nodes, with the intention of making them more appealing alternatives for moving down the tree.