In this thread, please respond with your feedback on the updated Monk class, once you’ve had a chance to test it out in the Dragonflight Alpha.

We now have a first look at the Monk talent trees.

Our goal with the class tree is to allow a player to construct different visions of their character and play with the hybrid nature and cheerful mobility that exemplifies a Monk.

For Brewmaster, our primary goal was to allow players the flexibility to lean into different flavors – to emphasize a brew-heavy playstyle, or go the way of the wily martial arts master – while also providing situationally-interesting decisions for survivability.

For Mistweaver, we want to offer support for both the caster and melee playstyles while maintaining a variety of choices for both builds. We also wanted to take a look at Mistweaver’s multi-target damage profile through returning and new talents such as Zen Pulse and Ancient Concordance.

For Windwalkers, we want to allow players the flexibility to focus on different styles of damage dealing, as well as offering opportunities to customize their ability loadout in ways that bring back old friends or lean into focus on specific abilities.

We’re excited for Monks to be joining the Dragonflight Alpha and we look forward to hearing your feedback!

We’d like to address few topics that have come up regarding the new Mistweaver Talent tree.

In the Mistweaver tree, our intent is for players to make compelling decisions between powerful abilities, particularly with their final points, in order to decide on their build. We want players to feel engaged with pathing throughout this tree and have reasons to explore a variety of options regardless of their build type.

This may result in some ability placement feeling counterintuitive. The question “this spell has great synergy with this other spell, so why are they not placed next to each other?” can be answered: We want to maintain pathing tension, so that players feel engaged throughout the talent selection, as well as avoid certain talent combinations for balance purposes.

Zen Pulse has been the main offender in our eyes. In future builds, we’re looking at increasing the cooldown and effect of Zen Pulse to make it feel more impactful while reducing rotational clutter.

We will be keeping an eye on this problem moving forward with spells such as Refreshing Jade Wind and Faeline Stomp.

Our intent is for both builds to feel as though they have options and reasons to explore throughout the tree. The trick will be to find pathing that satisfies both builds without removing options or build diversity.

We were overall pleased with the first iteration of this tree but are still looking to make improvements. Players can expect a few nodes that may have felt like blockers to swap positions and additional connections to facilitate this in future builds.

Our intent is for spreading Renewing Mist to feel rewarding and powerful. We’re happy so far with how Misty Peaks, Rapid Diffusion, and the return of Dancing Mist have been received and we’re glad to see many players feeling much the same way. Our goal is to tune around these effects remaining engaging and synergistic.

The placement of some abilities, namely Essence Font, at the top of the tree has come off as alarming for some players. Since Essence Font is not an ability that sees universal use, why is it required to move past the first gate?

The intent for this placement is to sacrifice a small amount of choice early in the tree to maximize choice later in the tree. There are many different modifiers later in the tree that rely on Essence Font to function, and the layout of the tree overall would be heavily impacted if these needed to be packed into a small subsection.

A good example of the opposite of this placement is Life Cocoon-related talents in this tree. While players can expect the Life Cocoon talents to feel more optional with increased pathing being added in future builds, the overall placement of these nodes is reliant on stemming from Life Cocoon, due to it not being required to progress past the first gate.

Thank you all for your continued feedback!

Hello Mistweaver Monks! We have a few updates to the Mistweaver spec tree coming in the next beta build. We’d like to take a moment and discuss our upcoming changes and the philosophy behind them.

The 2-point node placement on this tree has been a little tricky to get into what we feel is the right spot. Overflowing Mists is a situationally powerful bonus, so we don’t want it controlling pathing in the bottom of the tree. Resplendent Mist felt like its use cases were more universal than its positioning. Peaceful Mending shouldn’t block off any pathways but should feel like it contributes to navigating down the tree if selected.

To accommodate these principles, we’ve moved Overflowing Mist back up to above gate 2, Resplendent Mist has moved to the node below Ancient Teachings of the Monastery and Clouded Focus, and Peaceful Mending is occupying a new connection on the right side of the tree that is not exclusively blocking any pathing below. This new pathing has also enabled Bountiful Brew and Attenuation to move up and directly connect to Bonedust Brew.

We’ve been steadily moving most of Jade Bond’s value to its Gust of Mist/Soothing Breath bonus. The dichotomy we’re looking for on this choice node is more frequent access via Gift of the Celestials versus more impactful access via Jade Bond. We’re hopefully continued tuning can get us there.

We’ve made this into a choice node with Restorative Proliferation to make the middle path towards Invoker’s Delight slightly more appealing for all builds. Unison being on its own may have felt like a choice limiter to some builds who were interested in pursuing Invoker’s Delight.

We’re interested in pursuing this “random bag of goodies” design but felt the swing of expected value from this ability was too large, especially with the reintroduction of Essence Font to Thunder Focus Tea. In future beta builds, we’ve split Tea of Plenty’s effect into a choice node of two spells.

Here’s the new layout you can expect to see: 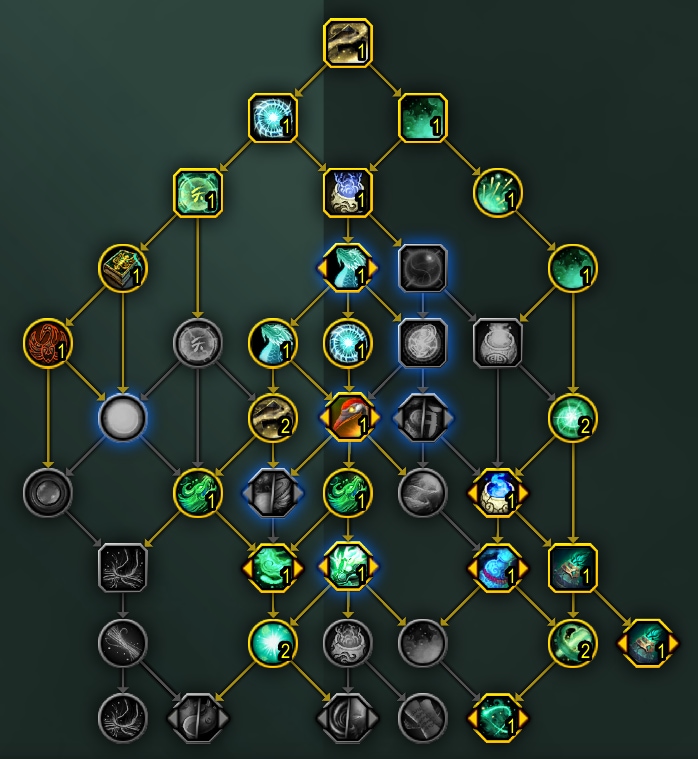 Thanks again for all of your testing and thoughtful feedback.