A future worth cosplaying for: Behind the Nexus’s latest skins

Armed with foam, hot glue, fabric, sewing machines, and the can-do attitude inherent to all cosplayers, four denizens of the Nexus valiantly took it upon themselves to craft and wear lovingly-recreated mantles inspired by their favorite Overwatch heroes. Now, Valla, Johanna, Raynor, and Stitches have become the heroes the multiverse never knew it needed. The creation of their ensembles was overseen by a talented team of Heroes of the Storm artists, who, excited by the prospect of assembling a new, rag-tag team of heroes wearing the outfits belonging to some of the most iconic Overwatch characters, stitched each thread of these four new skins together with fannish fervor.

We caught up with senior artist Andrew Kinabrew to talk about the latest crossover hitting the Nexus and what it’s like designing skins for Heroes of the Storm.

What excited you most about the concept of a Heroes of the Storm x Overwatch crossover?

What really gets me excited about skins in Heroes of the Storm is that we get to riff on every Blizzard universe and we're relatively unhindered by where those ideas can go. It’s cool to have a hero from one game hang out in the world of another game for a while and walk around in their shoes. For example, Raynor and Soldier: 76 share a lot of game mechanics, so we asked—what would Raynor look like as Soldier 76? Another thing we noticed is that Valla’s Strafe ability has a lot in common with Reaper’s Death Blossom ultimate, so we thought it would be really cool to see what a “Reaper” Valla would look like.

What’s it like collaborating to create such skin packs for Heroes of the Storm?

We’re always working together to create skins, but sometimes an important part of the process is allowing talented coworkers to do their job after we’ve come to a consensus. To create skins we start with ideas, which come from the concept artists and brainstorm sessions. For this pack, the idea came from before Overwatch was released. We get a bunch of what we call “roughs,” or thumbnail sketches, then mix and match—this shoulder pad would look cool with that weapon, or that has a stronger silhouette than this. Once we figure out the general aesthetic of where we want to go from the rough phase, we let the concept artist do a more polished version of what we decide on. I usually like to leave the artist alone to let them have fun and explore at this point. We work with such amazing people that it’s easy to just watch the baby be born. 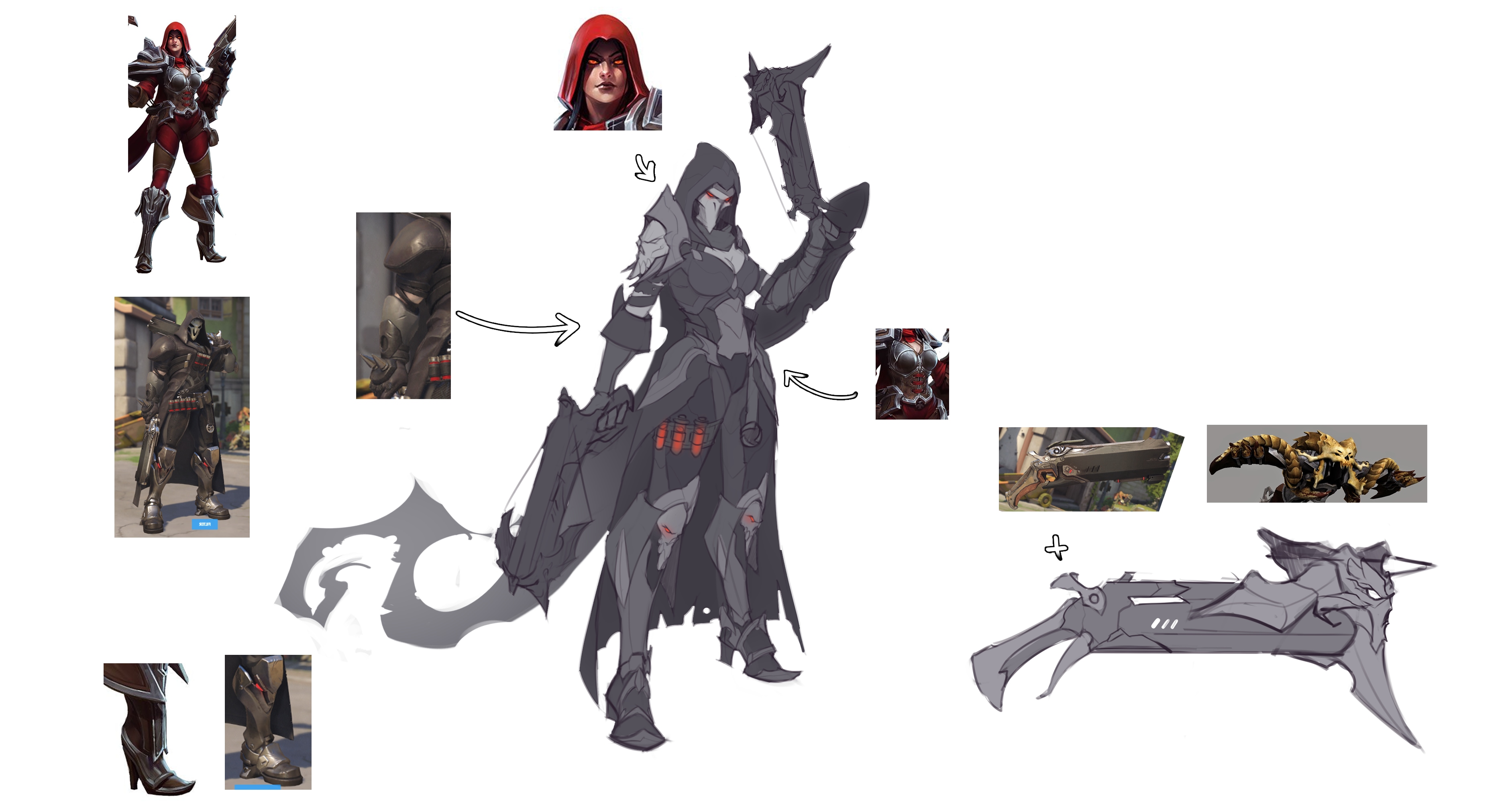 After the initial concepts are done, how does the creative flow progress?

Throughout the concept process we run trouble points by our technical artists to make sure that we don’t give them any surprises. These are logistical things like: will this model require more bones? Will it deform weirdly? Does this skin require special effects work above what we would normally do?

Once the concept is complete and vetted by our technical artists, we start the modeling process.  We’re mostly hands off at this point and just let our artists do their awesome work. We checked in to make sure that the Heroes style was being adhered to as we were simultaneously paying homage to Overwatch. The modeling phase is where the 2D concept art transforms into a playable 3D model. It takes a special kind of mind to take something that is flat and pull out that extra dimension; it involves solving many problems that can’t be seen in the flat illustration. The trickiest parts are hidden, and we have to infer details and function. That’s where the 3D artist’s creativity comes in.

Once all of that is finished, each skin goes off to our technical art team, who skin the characters to their rigs [the bone structure of the 3D model]. Tech art is really the unsung hero of the whole process. Without them, the rest of us artist types would be looking at T-pose models and just imagining what it would be like to have these inert toys battle each other.

Animation gets the model next and generally makes sure there are no visual bugs that have occurred with any proportion or strange new bits. Sometimes they’ll add some awesome flavor to the skin. Sometimes new pieces need to be animated to match the rest of the model. This part is really a thankless job as the result just looks right as a result of their work, so thank you, animators!

It was so fun seeing the artists get excited about what they were creating. Everyone involved should be proud of this pack. Some of my favorite skins are in it. 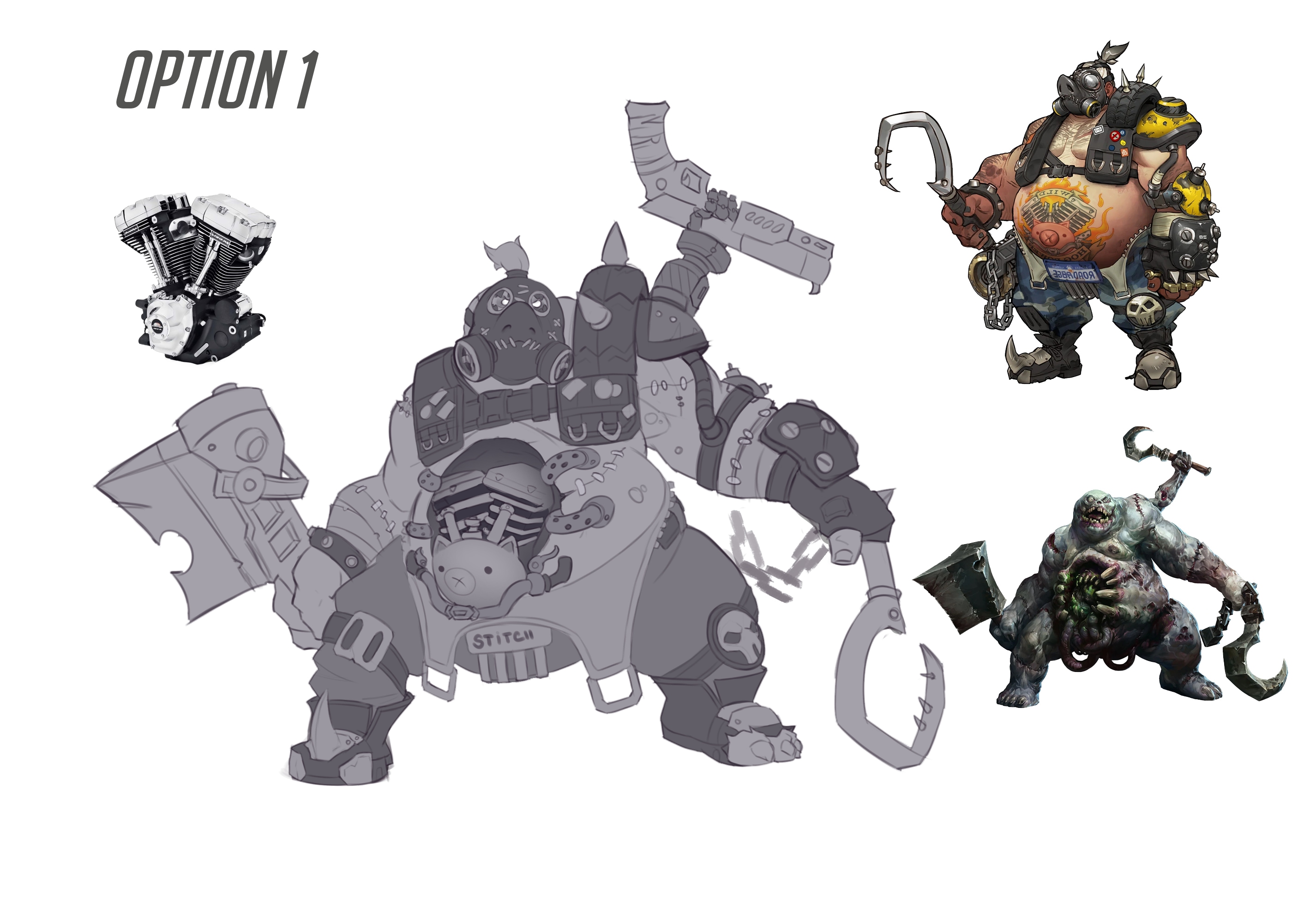 What has the design process been like during this past year’s work from home situation?

Work from home has been relatively painless from an art pipeline standpoint. The hardest part has been not having in-person collaboration sessions. There’s something nice about being able to vibe off the energy in a room and get excited about something with your colleagues. Being in the same room and leaning over to compliment someone’s work or see what they’re doing is so nice. I miss that. But, most of our job is just putting our heads down and making cool stuff. We’ve been trying to talk with each other over DMs or video calls and play video games with each other. Once we’re done with anything pertinent, meetings sometimes devolve into babble where we’re joking around with each other and talking about goofy things. It extends those calls into a necessary social release. We miss each other.

Were there any challenges or major roadblocks you faced along the way?

I think the biggest challenge was getting Johanna into Reinhardt’s power armor. There are spatial relationships that need to be considered; she still needs to read as Johanna, which means we have to take some liberties with how we squeeze her in there to keep the overall silhouette of the base character. We had to get the shoulderpads in the right spot so they don’t clip with the rest of her body in basic poses. It’s all part of the process. 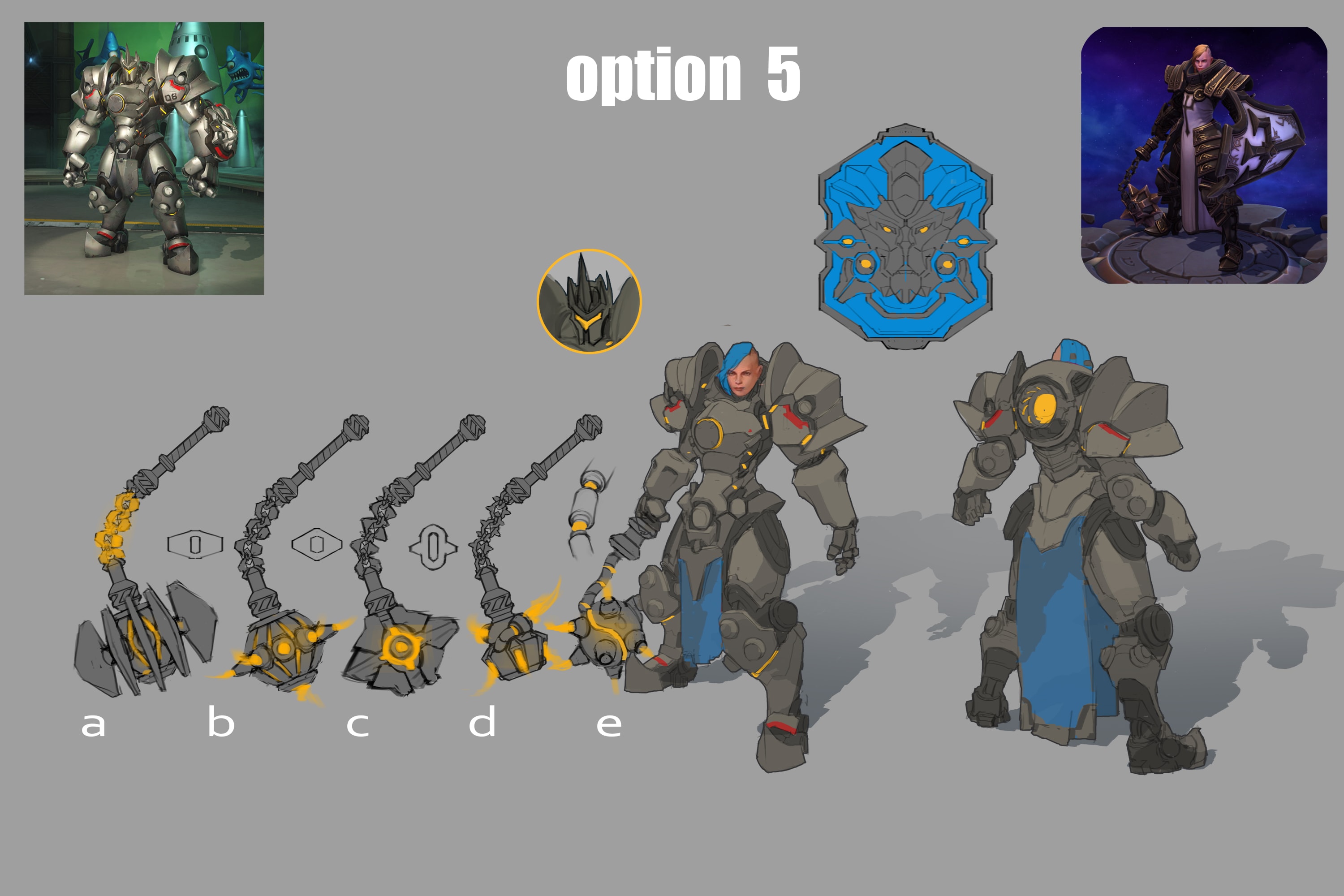 A close second was getting a good cross between Stitches and Roadhog. Stitches has that giant maw, and one of Roadhog’s signature design features is his exposed belly with that big engine and pig tattoo. We wanted to play off that so it made sense that if Stitches were to cosplay as Roadhog, he would just eat an engine.

How’d you decide on each of the designs? What about each character do you think meshes best with the Overwatch universe?

For this pack it was mainly about what made sense. Raynor and Soldier: 76, Valla and Reaper, Johanna and Reinhardt, and Stitches and Roadhog all share similar kits and/or tone in their respective games. With Johanna we know that we could have chosen Brigitte. She has a flail; she has a shield. We love Brigitte, and she would have been a cool skin, but we fell in love with Reinhardt’s armor when we first laid eyes on it, back before his debut in Overwatch.

We originally had the idea of giving Johanna a rocket-powered flail too, but we decided to go in another direction because the extra effects and animation required to make that rocket flail as cool as we wanted it to be would have added a huge delay to all the awesome things that we have coming down the pipe. Weighing those decisions is a reality of game development, but we’re really happy with the final version of Johanna’s Overwatch Crusader armor. We hope our players think it’s awesome, too. 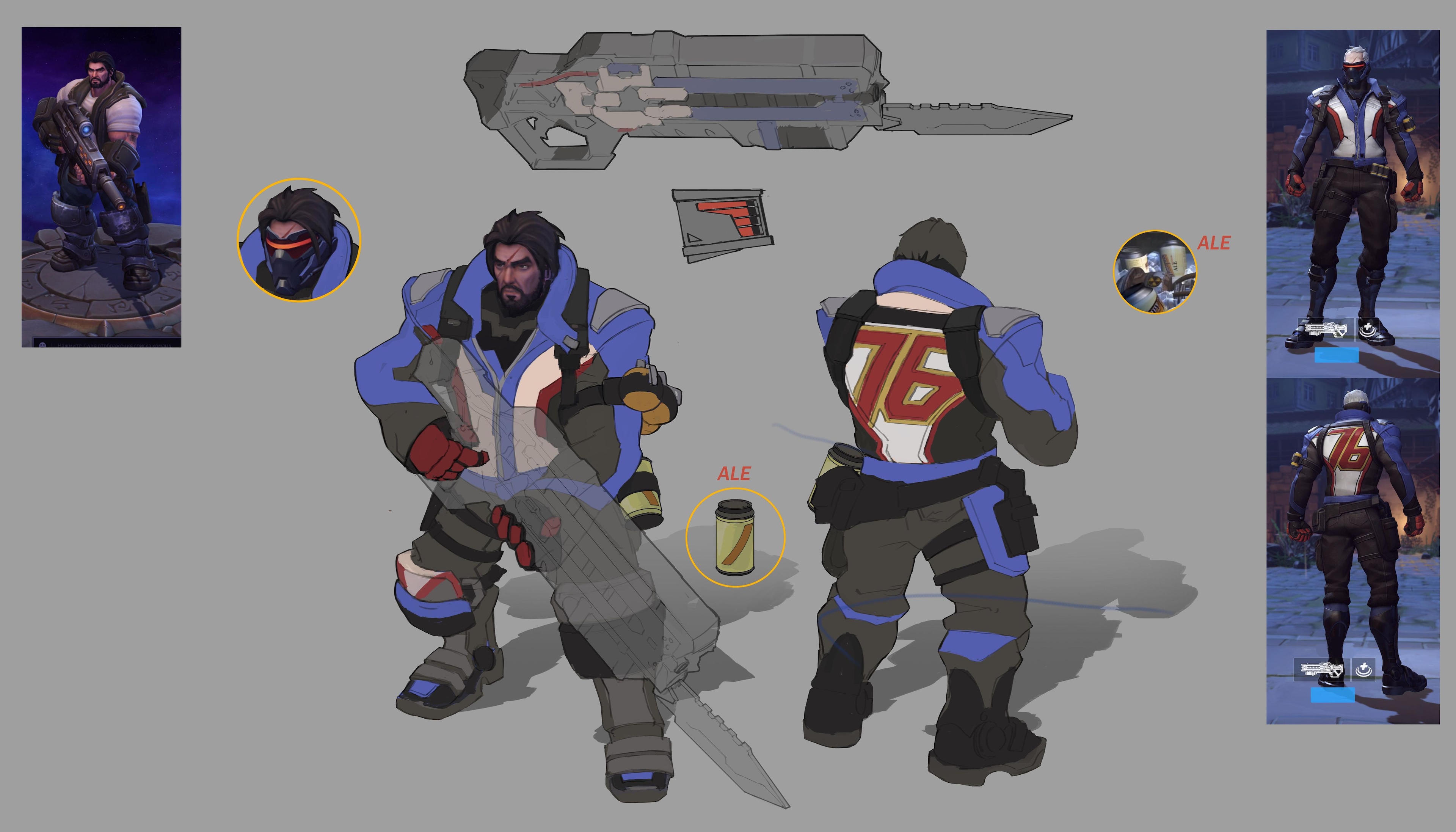 How did you maintain the balance between what’s unique to each hero while adding that futuristic Overwatch flair to them?

We’ve always loved the style of Overwatch, just like many of our players. We tried to solve this at the concept stage by looking at the reference material and taking the design as far as we could go. Luckily, we’ve had a lot of experience with crossovers, so it’s easier to know what works and what boundaries we can push. It also helped when we could use a hero’s personality to push the theme, too. Johanna’s demeanor could fit well within the Crusaders of Overwatch.  Soldier: 76 is just another name for Raynor in StarCraft. Pair similar traits, and these things generally work themselves out.

Do you have any favorite little details on any of the skins?

My favorite detail is the engine Stitches swallowed for his cosplay. I think it’s hilarious because it’s something Stitches would do. He’s a smart and resourceful Abomination, if you ask me.

I hope that we can do a shark-themed pack some day. Sharkhaka and Hammerhead Greymane would be a lot of fun.

Suit up and sport the distinctive threads of the multiverse’s most valiant heroes with new Overwatch Cosplay skins for four of your favorite Heroes of the Storm characters. Don the visor and masquerade around the battlefield in the name of justice as the mysterious Raynor: 76, or stitch together an appetite for mayhem—and flesh—as the hodgepodge Hogmeat Stitches.

To go along with their new cosplays, Johanna, Raynor, Stitches, and Valla have received immense reworks to their Primary Abilities, Heroic Abilities, and Talents. Take these Heroes out for a test drive and see the changes firsthand during your next visit to the Nexus.