Behind the Scenes of Hearthstone's Free Your Mind, a Hack-A-Thon Tradition

As the year begins to wind down, the Hearthstone team prepares for its pre-holiday break tradition: Free Your Mind! Free Your Mind is an informal and voluntary hack-a-thon where members of Team 5 can choose whether to band together on group projects or go it alone to work on personal passions for the final weeks of the working year. The only rule is that whatever you work on has some tie-in to Hearthstone!

Several features and systems in Hearthstone today were born from Free Your Mind projects, such as the option to equip a random Card Back, copy and pasting of deck codes, deck reordering, the offline Collection Manager, the tech behind Battlegrounds parties, your Golden cards appearing as Golden in Arena drafts, and the ability to search for dust refunds in your Collection! There are other Free Your Mind projects that end up improving live game systems and tools behind the scenes.

There are also many Free Your Mind projects that did not make it to the live server. Some of these are off-the-wall Tavern Brawls like a rhythm game, a dating sim, and one that was StarCraft themed—a StarCraft card set was also presented once upon a time. There are also a few projects that are being considered for the live game that are not quite ready to be shared yet.

As we prepare for this year’s Free Your Mind period, we wanted to highlight a couple projects from last year’s event.

A total of 32 deck lists were submitted and seeded at random into a single elimination bracket. Best-of-three matches were simulated from there, with the machine learning AI making a grand total of 8,253 decisions on its own over the course of the tournament. The semifinals were best-of-five, and the grand finals were a best-of-seven. The tournament was won 5-2 by a Highlander Hunter deck submitted by John Mcintyre, who you may recognize as the design lead for Madness at the Darkmoon Faire.

That “AFK tournament” inspired the Fairy Tales Tavern Brawl that released in early November, which was one of the most played of the year. In the Tavern Brawl, you play as the Headless Horseman, directing your actors as they try to perform your first-ever production. Each turn you choose a buff that can influence the AI’s decisions, and then watch as the AI plays the game out in front of you. This was one implementation of the machine learning AI, which the team plans to improve for potential use in the future.

It’s not just designers and engineers who participate in Free Your Mind. Last year, Senior Test Analyst David Carlock from QA wanted to make a Card Back in honor of his dog, Nimbus. Back when the team was all working from the office, Nimbus was a regular. He quickly became friends with everyone on campus, and is well known for his loving nature and smile. Nimbus was even featured in the Hearthstone Pupdate, representing the QA department. Eventually, many members of the team dubbed him the unofficial Hearthstone mascot!

David was the QA Oracle for Card Backs at the time. A feature Oracle is a person whose job it is to know everything about that feature, so they are able to answer any questions other team members might have about the feature, and also write the test design and documentation for it. That meant David knew a thing or two about making a Card Back. After David did the initial mock-up and preparation, artist Juyoung Oh joined him to help with the final version. 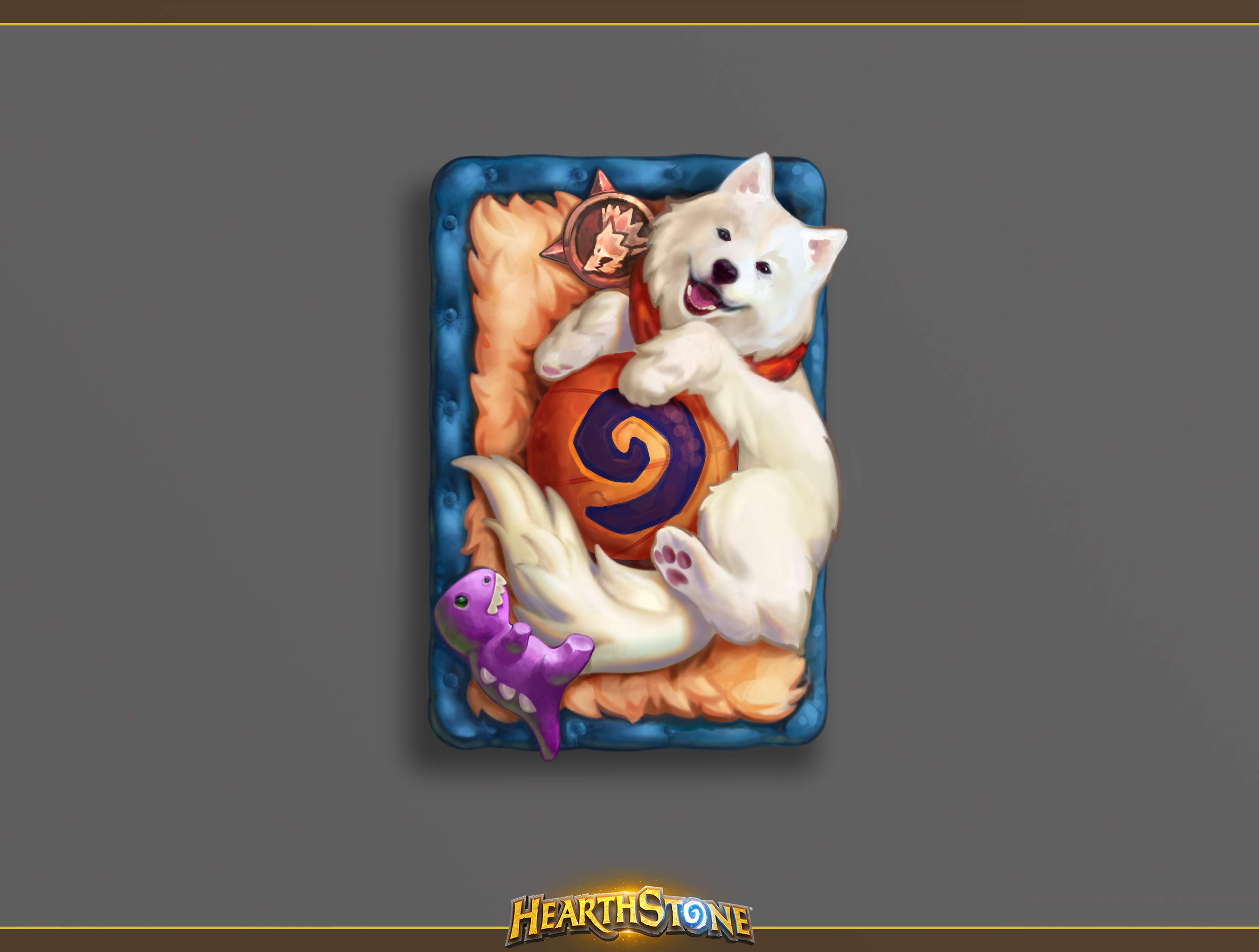 Here is the final result: Nimbus, playing with a Hearthstone ball in his dog bed. While the Nimbus Card Back won’t be added to the in-game collection, it honors his important role on the team as an unofficial mascot for the game, and inspiration for us all!

We’re excited about what could potentially come out of Free Your Mind this year. Let us know what fun ideas you think the team should pursue!