Tales from the Tavern: J4YOU

With over 400 other players invited to Masters Tour Ironforge, Vladyslav “J4YOU” Krasovskyi is prepared to prove himself as one of the top Hearthstone competitors in Europe and the world. 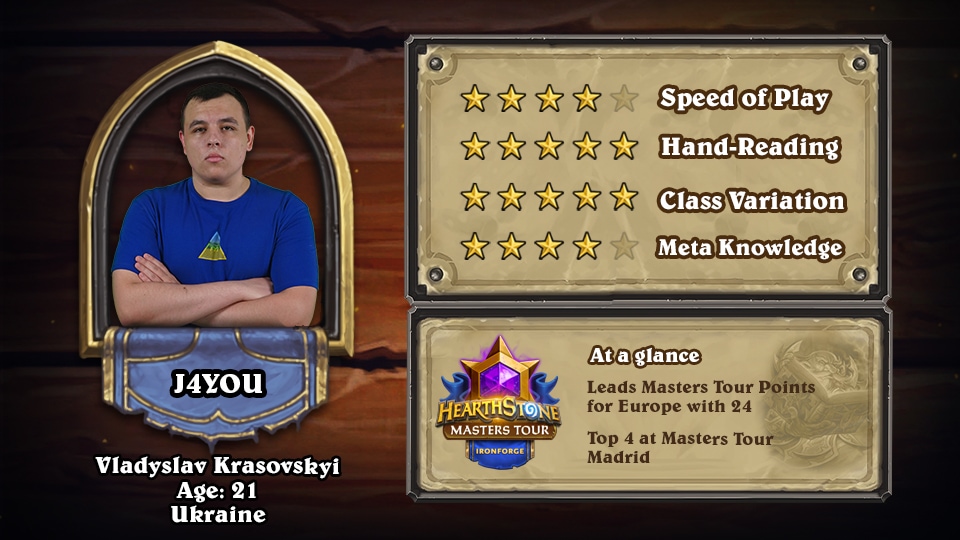 Hailing from Ukraine, J4YOU has been a devoted Hearthstone player since the game's launch. Growing up, he loved gaming but had an older PC that limited what he could play, which led him to play a variety of card games. Then, in 2014, a new online card game caught his eye and J4YOU remembers fondly “reading some news and found that Blizzard was going to release a card game in the Warcraft universe. It was pretty interesting so I had to give it a try.”

Hearthstone’s accessibility allowed J4YOU to jump into the scene. In early 2016, he became friends with Savva “Savvat” Alkov, after meeting the Russian player on Twitch. Watching Savvat’s early attempts to qualify for tournaments pushed J4YOU to take his chance at competitive Hearthstone. A year later, J4YOU’s hard work paid off as he placed 61st out of 77 at his first tournament, the 2017 HCT Europe Summer Championship.

Over the next few years, while he struggled to make a name for himself, J4YOU kept practicing. Then, beginning with an invite to Masters Tour Los Angeles, J4YOU achieved one of the most consistent performances in the 2020 Masters Tours. His incredible year concluded with a top 4 finish at Masters Tour Madrid. This string of successes has placed him at the top of the new Road to Grandmasters for Europe.

Heading into Masters Tour Ironforge, there are only three Masters Tours left before top points-earners from each region will receive invites to Grandmasters 2021 Season 2. Despite sitting at the top of the standings, J4YOU remains humble and focused on doing well, musing: “I will probably end up with a positive score.”

You can follow J4YOU on Twitter and Twitch, and watch him defend his Masters Tour Points lead on YouTube during Masters Tour Ironforge this weekend, starting on March 12 at 9:00 a.m. PT. We’ll see you in the Tavern!